Welcome to tutorial no. 21 in Golang tutorial series.

Advantages of Goroutines over threads

How to start a Goroutine?

Prefix the function or method call with the keyword go and you will have a new Goroutine running concurrently.

In line no. 11, go hello() starts a new Goroutine. Now the hello() function will run concurrently along with the main() function. The main function runs in its own Goroutine and it's called the main Goroutine.

Run this program and you will have a surprise!

This program only outputs the text main function. What happened to the Goroutine we started? We need to understand the two main properties of goroutines to understand why this happens.

I guess now you will be able to understand why our Goroutine did not run. After the call to go hello() in line no. 11, the control returned immediately to the next line of code without waiting for the hello goroutine to finish and printed main function. Then the main Goroutine terminated since there is no other code to execute and hence the hello Goroutine did not get a chance to run.

In line no.13 of the program above, we have called the Sleep method of the time package which sleeps the go routine in which it is being executed. In this case the main goroutine is put to sleep for 1 second. Now the call to go hello() has enough time to execute before the main Goroutine terminates. This program first prints Hello world goroutine, waits for 1 second and then prints main function.

The following image depicts how this program works. Please open the image in a new tab for better visibility :) 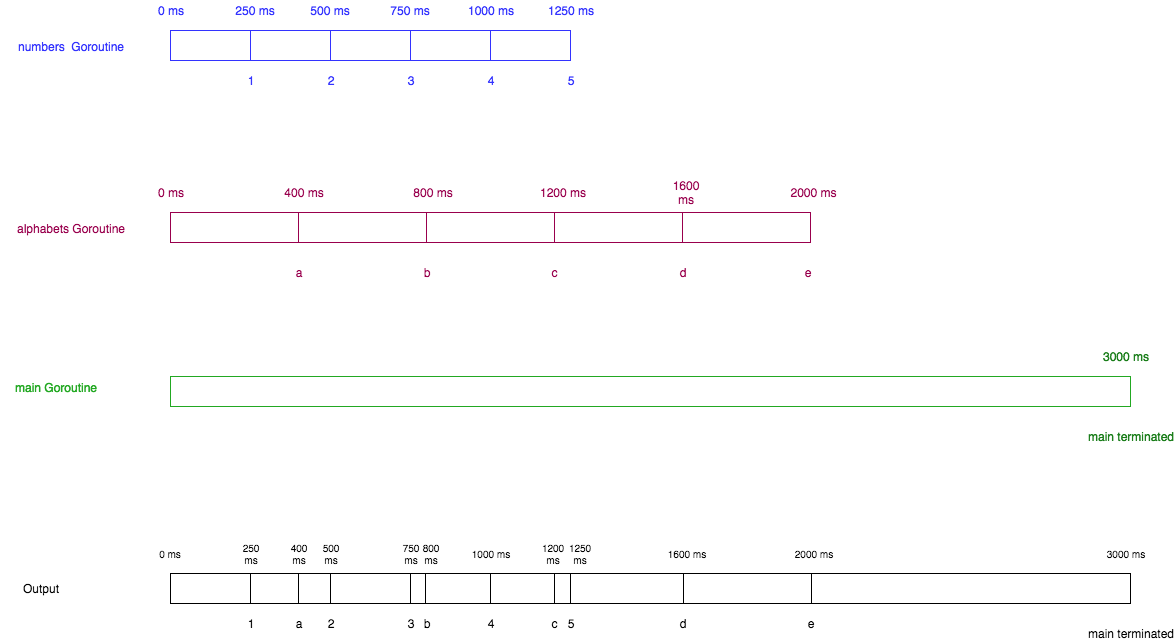 The first portion of the image in blue color represents the numbers Goroutine, the second portion in maroon color represents the alphabets Goroutine, the third portion in green represents the main Goroutine and the final portion in black merges all the above three and shows us how the program works. The strings like 0 ms, 250 ms at the top of each box represent the time in milliseconds and the output is represented in the bottom of each box as 1, 2, 3 and so on. The blue box tells us that 1 is printed after 250 ms, 2 is printed after 500 ms and so on. The bottom of the last black box has values 1 a 2 3 b 4 c 5 d e main terminated which is the output of the program as well. The image is self-explanatory and you will be able to understand how the program works.

That's it for Goroutines. Have a good day.