Welcome to tutorial no. 25 in Golang tutorial series.

In this tutorial, we will learn about mutexes. We will also learn how to solve race conditions using mutexes and channels.

Before jumping to mutex, it is important to understand the concept of critical section in concurrent programming. When a program runs concurrently, the parts of code which modify shared resources should not be accessed by multiple Goroutines at the same time. This section of code that modifies shared resources is called critical section. For example, let's assume that we have some piece of code that increments a variable x by 1.

As long as the above piece of code is accessed by a single Goroutine, there shouldn't be any problem.

Internally the above line of code will be executed by the system in the following steps(there are more technical details involving registers, how addition works, and so on but for the sake of this tutorial lets assume that these are the three steps),

When these three steps are carried out by only one Goroutine, all is well.

Let's discuss what happens when 2 Goroutines run this code concurrently. The picture below depicts one scenario of what could happen when two Goroutines access the line of code x = x + 1 concurrently. 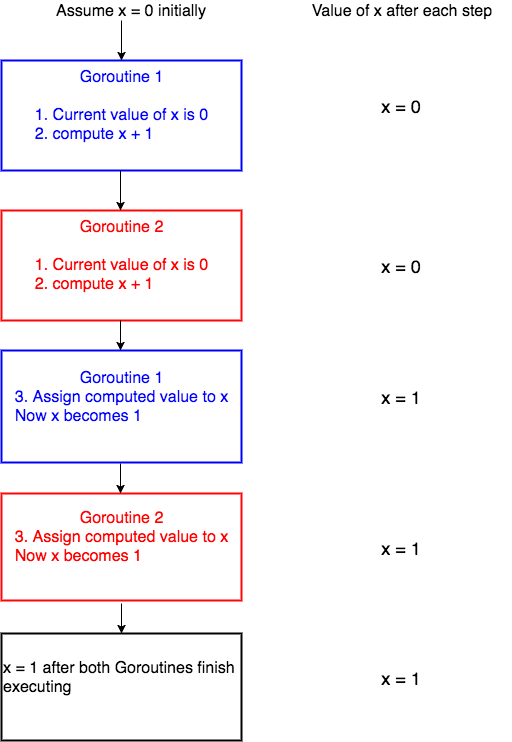 Now let's see a different scenario of what could happen. 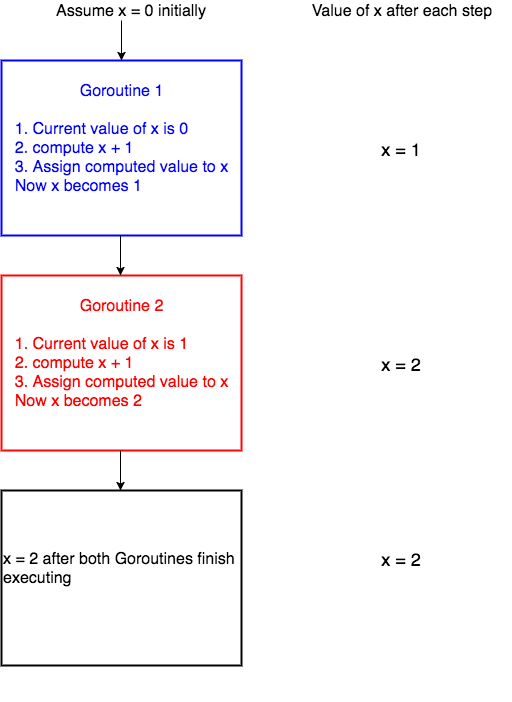 So from the two cases, you can see that the final value of x is 1 or 2 depending on how context switching happens. This type of undesirable situation where the output of the program depends on the sequence of execution of Goroutines is called race condition.

In the above scenario, the race condition could have been avoided if only one Goroutine was allowed to access the critical section of the code at any point in time. This is made possible by using Mutex.

A Mutex is used to provide a locking mechanism to ensure that only one Goroutine is running the critical section of code at any point in time to prevent race conditions from happening.

Mutex is available in the sync package. There are two methods defined on Mutex namely Lock and Unlock. Any code that is present between a call to Lock and Unlock will be executed by only one Goroutine, thus avoiding race condition.

In the above code, x = x + 1 will be executed by only one Goroutine at any point in time thus preventing race condition.

If one Goroutine already holds the lock and if a new Goroutine is trying to acquire a lock, the new Goroutine will be blocked until the mutex is unlocked.

Program with a race condition

In the program above, the increment function in line no. 7 increments the value of x by 1 and then calls Done() on the WaitGroup to notify its completion.

Mutex is a struct type and we create a zero valued variable m of type Mutex in line no. 15. In the above program we have changed the increment function so that the code which increments x x = x + 1 is between m.Lock() and m.Unlock(). Now this code is void of any race conditions since only one Goroutine is allowed to execute this piece of code at any point in time.

Now if this program is run, it will output

It is important to pass the address of the mutex in line no. 18. If the mutex is passed by value instead of passing the address, each Goroutine will have its own copy of the mutex and the race condition will still occur.

We can solve the race condition using channels too. Let's see how this is done.

Most Go newbies try to solve every concurrency problem using a channel as it is a cool feature of the language. This is wrong. The language gives us the option to either use Mutex or Channel and there is no wrong in choosing either.

In general use channels when Goroutines need to communicate with each other and mutexes when only one Goroutine should access the critical section of code.

In the case of the problem which we solved above, I would prefer to use mutex since this problem does not require any communication between the goroutines. Hence mutex would be a natural fit.

This brings us to the end of this tutorial. Have a great day.

Next tutorial - Structs Instead of Classes